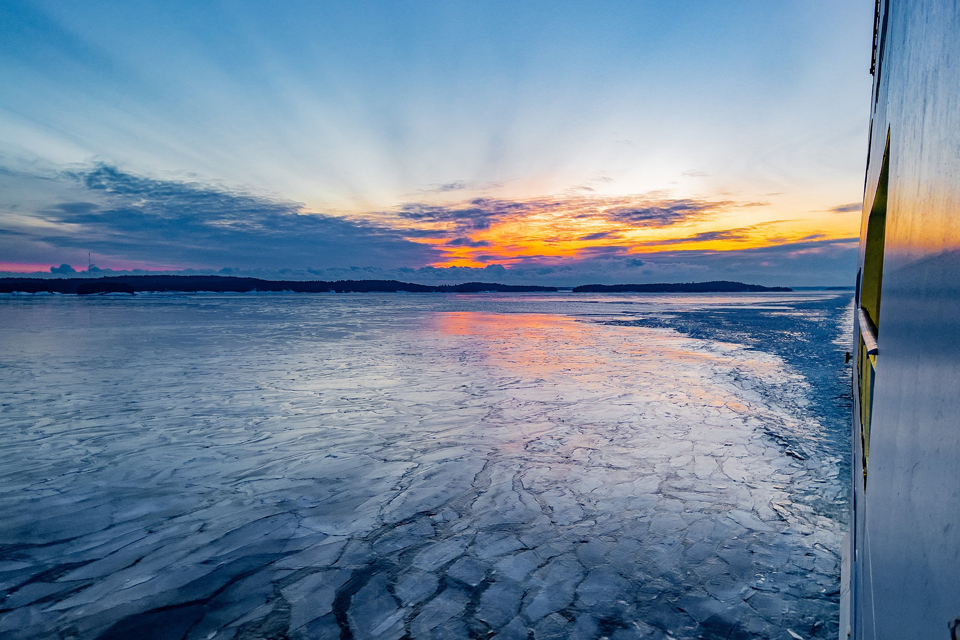 Tallink Grupp’s vessels are operating all year round, irrespective of the weather and ice conditions. Due to our Northern location, cold winters and a thick layer of sea ice make the operation of vessels different than during melt water.

WINTER NAVIGATION ON THE BALTIC SEA

The term winter navigation applies to shipping practiced in the Northern, frozen sea areas. Ships operating in the Baltic Sea region must have an adequate ice classification so that they can operate at sea in winter. The ship’s ice class is determined, among other things, by the ratio of the ship's hull to the engine power, also the strength of the ship's hull must be sufficient to navigate in icy sea.

GETTING TO DESTINATION UNDER THE HARD ICE CONDITIONS

”Vessels navigate in the Finnish archipelago along the so-called ice gutter, which is much like a road on the sea. While travelling in the ice gutter, turns and overtaking of other ships can be challenging, as is navigating in poor visibility. In the high seas, the ship’s route is selected on a voyage basis, based on the information of ice movements and thickness at each location. Existing ice gutters will be utilized, if there are any available. As ice fields move, a canal opening in the ice in a matter of minutes often becomes the most difficult point to navigate”, Silja Serenade’s master Juha Rautavirta explains. 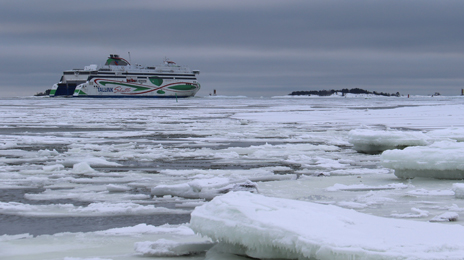 During severe winters, all the countries around the Baltic Sea have to use icebreakers to keep their ports serviceable. Similarly, vessels operating shipping routes keep ice gutters open by navigating them regularly. Majority of vessels belonging to Tallink Grupp’s fleet has 1A Super ice class which means that they are able to operate even during the harshest winters mostly without the aid of an icebreaker. The vessels function as their own icebreakers instead.

”Most recently, in 2010, there was a momentary severe ice situation in Tjärven, located in the Western part of the Åland Sea. The traffic jam of the trapped ships was unstuck only with the help of a Finnish icebreaker,” Rautavirta recalls.

IMPACT OF ICE ON THE SHIP’S OPERATION

Tallink Grupp’s vessels are made to withstand any weather. Severe ice conditions are really rare these days, but in the archipelago, for example, thick ice must be taken into account when a vessel turns. During the winter, some shipping routes also introduce a so-called winter schedule, which allows for a little more travel time.

Pack ice at sea can be so thick that it makes it difficult for the ship's main engines to access cooling water. In high winds, the compression of ice may cause such great friction on the ship’s hull that the ship can no longer move forward on its own.

”In an extreme situation, the vessel could get stuck in the ice and an icebreaker would be needed to help the vessel get unstuck. Fortunately, this happens very, very rarely”, Rautavirta says. 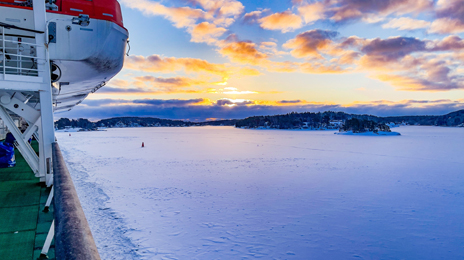 The ships employ maritime professionals who are accustomed to operating even in harsh ice conditions. The crews have years of experience and expertise in operating on ice. This is the kind of special expertise that our crew members at Tallink Grupp’s vessels can and should be proud of. Winter comes around every year, however, ice conditions can be utterly different every year.

”I have many memories of cold winters and harsh ice conditions. The toughest ice season I have experienced is perhaps the Kvarken traffic where a normal four-hour trip became a 36-hour one and the destination port changed, because reaching Umeå was not achievable even with the help of several icebreakers. Working on cargo vessels, voyages to the ports of the Bay of Bothnia were also challenging. Sometimes the trip was made in the fork of an icebreaker, ” Rautavirta recalls.

Read more about icy winters in the Baltic Sea and winter navigation: