DID YOU KNOW HOW THE AIR CONDITIONING SYSTEM ONBOARD SHIPS AND SHIPS’ CABINS WORKS? During Coronavirus pandemic, travellers are wondering about various safety topics. One of the issues raising many questions by the travellers is how the ships and particularly ships’ cabins are air-conditioned. In short, we can say that the ventilation is efficient. Indeed, each cabin is air-conditioned individually, not from one cabin to the next. In addition, due to a slight overpressure in the system, the air from hallways does not enter the cabins.

THE AIR IN THE SHIPS’ CABINS IS CONTINUOUSLY REFRESHED

The air conditioning is in use at all times, which means that the air is constantly exchanged for completely fresh air every 5-10 minutes. The minimum operational setting for taking in fresh air is set at six times per hour, however the air is exchanged for the fresh air much more frequently.

AIR CONDITIONING OF RESTAURANTS, SHOPS AND OTHER AREAS ONBOARD

The air conditioning of ships’ restaurants, shops and other public areas is carried out based on the same principle as in the ships’ cabins. The fresh air is taken in by the air conditioning system from the outside according to the frequent circulation cycle, meaning that the same air is not re-circulated indoors. The air-conditioning of the ship’s public areas is organised area-specifically, which means that the same incoming air that is used is then directed out from the very same area it was used in.

Under the normal conditions, there are detectors to monitor the level of CO2 in the air and run the air conditioning as needed. Due to the Coronavirus pandemic, the air-conditioning settings on the operational vessels are set to maximum capacity. 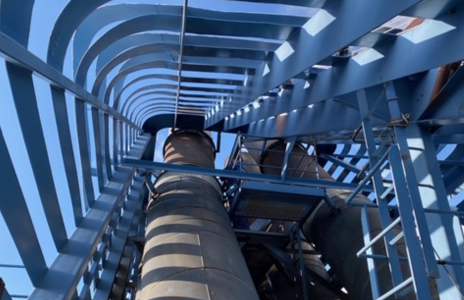 ARE THERE DIFFERENCES IN THE AIR CONDITIONING SYSTEMS ON OLD VS NEW VESSELS?

Concerning the work principle of the onboard air conditioning system, it should be noted that the exhaust air is directed out via one set of flues and the fresh air is taken in separately. Those exhaust and fresh air supply flues are located at the opposite sides of the ship, i.e. they are 10 metres apart from each other. The ships’ air conditioning system and the related equipment are regularly serviced and very carefully monitored.

Read more about our safety measures on our vessels